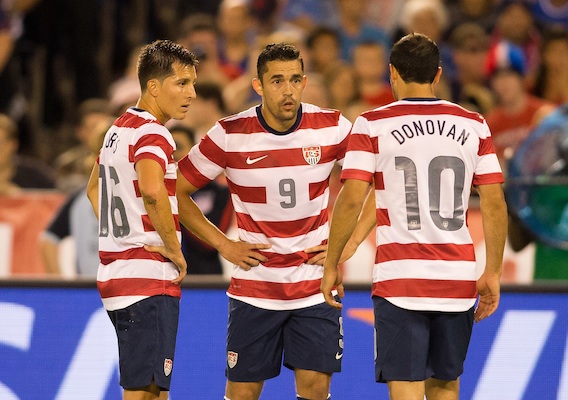 SAN DIEGO, Calif. - July 5, 2013: The US Men's National team defeated the National team of Guatemala 6-0 during an International friendly match prior to the 2013 Gold Cup at Qualcomm stadium.

The last time that the U.S national men’s team had challenged Guatemala was during the final prep match right before the 2013 Gold Cup. The Yanks had led the contest by a score of 6-0 and had continued on their streak by winning the tournament.

Now in 2015, the Yanks would be facing Los Chapines on the 3rd of July in Nashville at the LP Field. This news was announced by U.S Soccer this afternoon. The grand favorite for the Group A are the Americans. Other teams featured during the contest would be Honduras, Panama and Haiti. Group C teams present would be Cuba, Mexico and Trinidad.

Jurgen Klinsmann, the U.S. national head coach had stated that he is absolutely thrilled that his side would be having the opportunity to have Guatemala as opponent before the Gold Cup. He also added that the team is quite similar to the club’s regular opponents in the Group A and as such would constitute of a good preparation. The objective of the Yanks would be to win the tournament as the first step. The coach further added that the Nashville team had always yielded great national teams and they are looking forward to a huge crowd at the LP Field.

Four days following the match against Guatemala, the U.S. team would be opening the Gold Cup by playing against Honduras at the Toyota Stadium in Frisco, Texas. The final of the Gold Cup would be held on the 26th of July in Philadelphia.