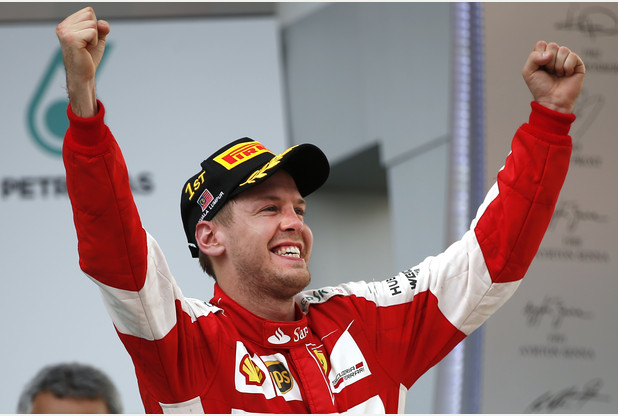 The news proved to be quite sensational as Sebastian Vettel won the Malaysia Grand Prix for Ferrari, defeating Lewis Hamilton in the process. Vettel had joined the Ferrari this year as a replacement for Fernando Alonso. His GP win this year was a strategic one while Mercedes could not compete due to struggles with their types in the tropical heat of Malaysia.

Hamilton’s team-mate at Mercedes Nico Rosberg came out third from Kimi Raikkonen from Ferrari who kept the fight going despite a puncture experienced earlier during the day.

This incredible performance by Vettel and Ferrari acted as a wake-up call for Formula 1 in general and Mercedes. The German manufacturer had indeed been dominating the sport from the start of last season. This win raises some questions about Mercedes chances of winning the world champion this year. Vettel proved that Mercedes would have to fight and unexpected competition with Ferrari picking up on their stance.

Vettel initially started second during the Grand Prix. He then took the lead when while Mercedes decided to call in Hamilton for a stop for a safety car period early in the game. Mercedes opted to go on with the majority of the race on the slower hard type as they believe in provided greater resilience on their car. However, Vettel opted for the faster medium tyre for most of the race and this proved that Hamilton was not able to get on terms.

This race marked an unbelievable turnaround by Ferrari considering that for the past year they have experienced their worst season for 21 years.