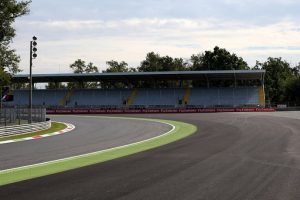 During the last lap of the USGP at Austin, Max Verstappen overtook Kimi Raikkonen on the outside of the track and subsequently lost the place due to a penalty handed out minutes later. The penalty caused a lot of controversy but highlights one of the biggest issues in modern Formula One: run-off areas. In the last couple of years, use of run-off areas by drivers to gain an advantage has increased, making life difficult for the stewards. Here are three solutions for solving the problem:

Traditional racing circuits had a very little run-off area, and the little they did was mostly grass or gravel. Probably the best way to ensure that drivers respect the boundary of the track and avoid using run-off is to convert circuits with tarmac run-off back to gravel or grass. When a driver goes off-line, he will pay for it, either with retirement or loss of time.

One of the arguments against a gravel and grass run-off is its utility to other racing categories. The change would benefit Formula One, and possibly other four-wheel series. However, MotoGP and other bike series would protest at the change. Gravel especially increases the risk of spinal injuries during an accident. The solution: add strips of grass, creating a barrier between the curb and the asphalt run-off.

The final solution involves no changes to the circuit. Instead, there should be clear penalties for any violation of track limites. For example, if a driver makes a mistakes and goes off-track, there should be an automatic penalty.

The sport of Formula 1 is considered the pinnacle of motor racing. Although it does not have a large footprint in the United States (it has one race in Texas), it has races on every continent. But how does the sport make its $3 billion in revenue?

The revenue stream for the sport comes from three sources:

The first revenue stream is from race hosting fees. Circuits pay the sport to be able to host and run a race weekend. This is the largest source of income for the sport and is how Bernie Ecclestone has been able to get revenues (and profits) to skyrocket. Because emerging economies want to get their countries on the map, they are willing to pay as much as $80 million per race.

The second revenue stream comes from TV rights. Sky reportedly paid F1 over a billion Dollars for six years of exclusive coverage starting from 2019. Thanks to these gigantic figures, the TV viewing figures have dropped considerably as free to air TV can no longer afford these fees.

The third revenue stream is from long-term advertising deals. Heineken has agreed to pay $150 million for the next five years to promote the sport. In addition, there are trackside advertising deals that also contribute directly to F1 and not the circuits.

Now with the sale of F1 to Liberty Media, it remains to be seen what track they will take when it comes to marketing the sport.

The 2017 Formula One season pre-season was exciting because of a rule change that meant we would see completely different designs to previous years. Stable regulations are meant to change the status quo, sending the winner back and propelling new teams to the front. Sadly, Mercedes continued to dominate the sport, easily winning both titles. For the 2018 season, there are no headline changes, but enough to see some interesting concepts when the teams launch the new cars. Here are some of the changes that will affect the teams the most:

The Halo cockpit protection is the most controversial of the changes. Drivers and team principals are not happy with the addition, especially with limited testing. Also, the Halo crash tests require that the protection can handle the load of a bus. Every team talks about the challenge of incorporating the Halo and the aerodynamic changes that result.

Mercedes (and to a lesser extent Ferrari) developed systems that would burn oil for more engine power. However, once other teams and the FIA got wind of the method, measures were put in place to limit the oil burn. The limits are now even more stringent this year and will ensure that oil burn is no longer a performance advantage.

There are also limits on the effect suspension can have on the rake and aerodynamic performance of the car. Both Mercedes and Red Bull want the FIA to allow active suspension again, thereby eliminating any complex systems teams will develop to get around the new rules.