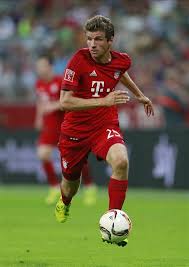 Karl-Heinz Rummenigge, the Bayern Munich chairman, has revealed that Muller is like Messi and no amount offered for his skills will convince the club to let him leave.

In speaking with Bild via Goal, Rummenigge said, “Muller will stay at Bayern, regardless of what any club offers. There is no amount that would make us consider an offer. Messi belongs to Barcelona, Rooney belongs to Manchester United and Muller belongs to Bayern. It should stay like that. There might be players out there who have a better technique and who are faster, but there is no second Thomas Muller in this world.”

It was clear that Muller was extremely valuable to Bayern and as the chairman puts it represent the Mia San Mia feeling.

Being a part of the World Cup winning squad, Muller was heavily linked to leave for Manchester United but it never materialized because he is an ‘unsellable player’ according to the club.

At the age of 26, Muller has already scored 129 goals in 300 appearances since the year 2000. In addition, he also helped the club win six domestic cups, four Bundesliga titles and a Champions League trophy as well. The Club World Cup and the UEFA Super Cup has also been won by Bayern, thanks to his efforts.

As for this season, the German has already scored eight goals in the same number of appearances. As a result, this has helped Bayern take the top spot in the Bundesliga table too.