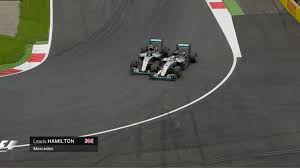 Lewis Hamilton won the 2016 Austrian Grand Prix after a final lap collision between himself and teammate Nico Rosberg, who was leading at the time. After a brake-by-wire failure going into turn one, Rosberg lost a lot of ground.

“He made a mistake into Turn 1,” Hamilton said of Rosberg, “and so I had an opportunity to go down the outside into Turn 2. I left a lot of room on the inside, and I guess he locked up and crashed into me. I think he had a problem with his brakes.”

As you would expect, Rosberg was extremely unhappy:

“I am absolutely gutted;  it is unbelievable,” Rosberg said. “The sport sometime…I was sure to win that race and then I lost it on the last lap. It is pretty intense.”

Mercedes team boss Toto Wolff was angry: “Brainless! Seeing both cars nearly colliding is upsetting. It could have easily been a double DNF.”

Rosberg limped his car home in fourth after being passed by Max Verstappen and Kimi Raikonnen passed his slowing car. Something he was called out on the stewards for, in addition to taking the blame for collision with Hamilton:

“”Having taken note of the extensive evidence given by both drivers and the video and telemetry data, it was apparent that Car 44 (HAM) was in front of Car 6 (ROS) – i.e. more than fully alongside – and that the driver of Car 44 could have clearly made the turn (T2) on the track, if not for the resultant collision.

“Car 6 did not allow Car 44 ‘racing room’ and hence the driver of Car 6 was responsible for the collision.”

Now, as a result of the collision, Mercedes will be deciding shortly whether to implement team orders and freeze the order of the drivers beyond a certain point in the race. This might be the only way to prevent it happening again this year.