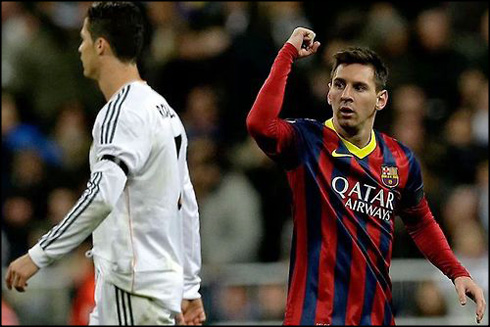 Barca forward Messi has beaten Madrid winger Ronaldo to win the AS’ La Liga Player of the Season award.

The results of the poll showed that Messi stood at 55.87 percent while Ronaldo finished second at 35.37 percent.

Not only was the Argentinian instrumental in helping Barca win the La Liga title but topped the list of assists – 18 in all – for the 2014-15 season. Ronaldo, on the other hand, created 16 goal scoring opportunities for Real Madrid leaving him just two short of Messi when it comes to assists.

That said, having scored 43 La Liga goals wasn’t enough to beat Ronaldo who finished the season with a personal best of 61 goals in all competitions out of which 48 of them were against La Liga clubs.

James Rodriguez, who scored 13 goals and made 13 assists for Real Madrid this season, finished in third spot by receiving 5.89 percent of the votes.

While Ronaldo finished the season with a hat trick over Getafe, beating Messi tally by 5 goals, they were not able to challenge Barca for the title, who were already 4 points ahead in the title race with two games in hand. As for the Champions League, both Ronaldo and Messi are joint top scorers with the latter now having the chance of surging ahead in the finals against Juventus.

Antoine Griezmann and Neymar, belonging to Atletico Madrid and Barca respectively, finished fourth and fifth place in the poll by winning 1.7 and 1.17 percent of the votes.